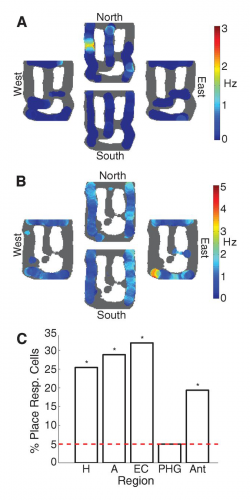 Theories of episodic memory suggest that memory encoding and retrieval are facilitated by spatiotemporal context: a continually updated representation of location in space and time. Recent work in the lab sought to examine the role of spatial context in human episodic memory retrieval through a hybrid spatial and episodic memory task. Miller et al. (2013) identified place cells that fired at specific locations in a virtual town as neurosurgical patients performed a delivery task which required them to deliver items to different stores in the virtual environment. Following this navigation task, patients were asked to freely recall the items they had delivered. Place cell activation patterns during the navigational task were then compared to the subsequent activation patterns that occurred during the free recall task. Miller et al. found that neural activity during the retrieval of each delivered item was similar to the neural activity associated with the location where that item was encoded. These findings show that place-responsive cell activity was reinstated at the time of recall, supporting theories that implicate contextual reinstatement as the basis for memory retrieval. 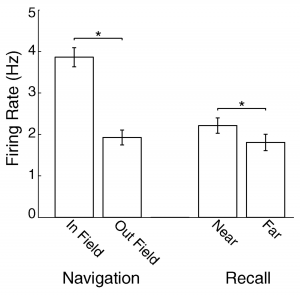 Fig. 4: Place-responsive cell activity during navigation and recall. (Left) Navigation. Average place cell firing rates when navigating within a cells place field versus traversals outside of the place field (*P < 0.0001). (Right) Recall. Average place cell firing rates from 1.5s before to 1s after recall onset of items near the center of a place field versus items presented farther from the center of a place field (*P = 0.03). Error bars indicate SEM.
Retrieved from "https://memory.psych.upenn.edu/mediawiki/index.php?title=Main_Page&oldid=4862"
Category: