To explain the processes underlying encoding, organization and retrieval of episodic memories, Kahana and colleagues (notably Marc Howard, Sean Polyn, Per Sederberg, and Lynn Lohnas) have developed a class of retrieved-context models. These models assume that the input to the memory system itself produces contextual drift, and that the current state of context is used to retrieve items from memory. The temporal context model (TCM; Howard and Kahana, 2002) was introduced to explain recency and contiguity effects in free recall. Specifically, recency effects appear because the context at the time of the memory test is most similar to the context associated with recent items. When an item is retrieved at test, it reinstates the context active when that item was studied. Because this context overlaps with the encoding context of the items' neighbors, a contiguity effect results. Consistent with experimental data, TCM and its variants also predict that recency and contiguity effects are approximately time-scale invariant (Sederberg, Howard, and Kahana, 2008). Polyn, Norman, and Kahana (2009) developed the Context Maintenance and Retrieval model (CMR), which is a generalized version of TCM that accounts for the influence of non-temporal associations (e.g., semantic knowledge) on recall dynamics. MATLAB scripts to run the CMR model can be downloaded here.

Despite the vast stores of memories we accumulate over a lifetime of experience, the human memory system is often able to target just the right information, seemingly effortlessly. How does the memory system accomplish this feat? Most previous models made the simplifying assumption that memory search is automatically restricted to a target list, largely bypassing the need to target the right information. Lohnas, Polyn, and Kahana (2015) developed CMR2 to address this issue. In CMR2, memory accumulates across multiple experimental lists, and temporal context is used both to focus retrieval on a target list and to censor retrieved information when its match to the current context indicates that it was learned in a non-target list. The model simultaneously accounts for a wide range of intralist and interlist phenomena, including the pattern of prior-list intrusions observed in free recall, build-up of and release from proactive interference, and the ability to selectively target retrieval of items on specific prior lists (Jang & Huber, 2008; Shiffrin, 1970). Healey and Kahana (2015) used CMR2 to better understand why memory tends to get worse as we age. By fitting CMR2 to the performance of individual younger and older adults, they identified deficits in four critical processes: sustaining attention across a study episode, generating retrieval cues, resolving competition, and screening for inaccurate memories (intrusions). Healey and Kahana extended CMR2 to simulate a recognition memory task using the same mechanisms the free recall model uses to reject intrusions. Without fitting any additional parameters, the model accounts for age differences in recognition memory accuracy. Confirming a prediction of the model, free recall intrusion rates correlate positively with recognition false alarm rates. MATLAB scripts to run the CMR2 model can be downloaded here.

We investigate the neurophysiology of episodic memory with electrocorticographic (ECoG) and single neuron recordings from neurosurgical patients who have had electrodes surgically implanted on the cortical surface of the brain or in the medial temporal lobes (including hippocampus) as part of the clinical process of localizing seizure foci. One focus of this research is to determine the oscillatory correlates of successful episodic memory formation and retrieval. Analyses of such recordings have shown that 65 - 95 Hz (gamma) brain oscillations increase while participants are studying words that they will successfully, as opposed to unsuccessfully, recall (Sederberg et al., 2003; Sederberg et al., 2006; Burke et al., 2014; Long et al., 2014; Long and Kahana, 2015; for a video, click here ). Gamma activity in hippocampus and neocortex likewise increases prior to successful recall (Sederberg et al., 2007; Lega et al., 2011; Burke et al., 2014; for a video, click here ). The movie below illustrates these findings. 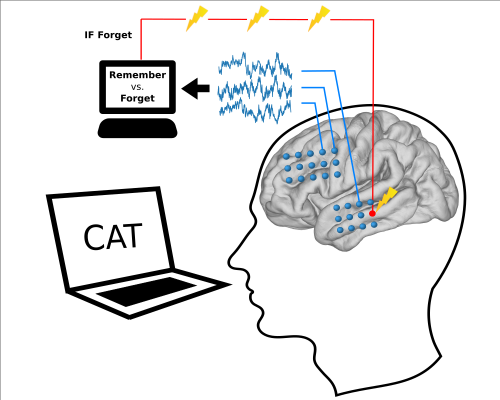 Figure 7: Closed-loop system for neuromodulation. Patients studied lists of words shown on a laptop screen while another computer monitored signals recorded from electrodes implanted directly in the brain. The computer analyzed the brain signals during learning to predict whether the patient would later remember the word. If the prediction was that the patient would forget the word, the computer triggered electrical stimulation to the lateral temporal lobe to improve learning.
Retrieved from "https://memory.psych.upenn.edu/mediawiki/index.php?title=Main_Page&oldid=6396"
Category: