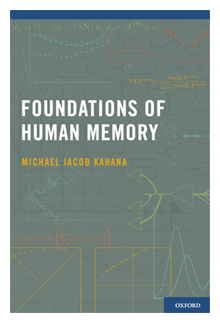 Foundations of Human Memory provides an introduction to the scientific study of human memory with an emphasis on both the major theories of memory and the laboratory studies that have been used to test those theories and inspire their further development. Written with the undergraduate student in mind, the text assumes no specific background in the subject, but a general familiarity with scientific method and quantitative approaches to the treatment of data.

Foundations of Human Memory is organized around the major empirical paradigms used to study memory in the laboratory and the theories used to explain data obtained using those paradigms. The text begins with a focus on memory for individual items, building up to memory for associations between items, and finally to memory for entire sequences of items and the problem of memory search. Several major theories of memory are considered in detail, including strength theory, summed-similarity theory, neural network based theories, retrieved-context theory, and theories based on the division of memory into separate short-term and long-term storage systems. The text emphasizes basic research over applied problems, but brings in real-world examples and neuroscientific evidence as appropriate.

Click here to order Foundations of Human Memory from Amazon.com.

Michael Jacob Kahana, PhD, is Professor of Psychology at the University of Pennsylvania. Kahana's research focuses on basic mechanisms of human memory through use of direct brain recordings and computational modeling of behavioral data. Kahana has published more than 100 peer-reviewed journal articles on the psychology and neuroscience of human memory. He was the 2010 recipient of the Troland Research Award from the U. S. National Academy of Sciences.